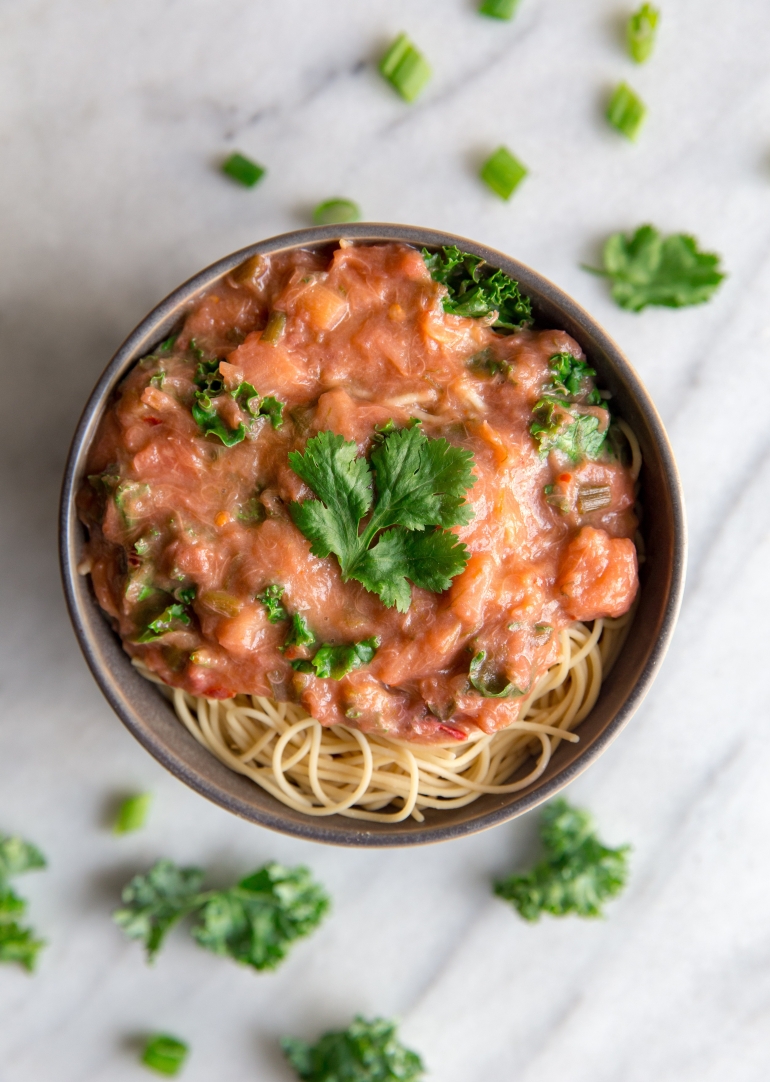 I might have mentioned this before, but back in 2011 when I was first starting out eating plant-based, I would scour the internet and cookbooks for recipes and keep them all on a Word doc on my computer. I liked to write notes on there, especially when I changed up the recipe. A few months ago I came across the printout of those recipes and have been going through them looking at the things I first experimented with. Some pages just have a big X over a recipe, while others have hearts or lots of notes detailing my veganized version.

When I remembered that rhubarb season typically starts in April, I dug through the stack because I remembered making a really yummy rhubarb pasta sauce back then. I was able to trace the original recipe back to a 2012 blog post by Naturally Ella. I have based this very much off of her recipe, with a few updates to make it vegan and oil-free optional.

Also, I have realized that many people have never tried rhubarb. It’s not very popular in America. My first experience is from when I was dating my husband and his mom made a strawberry rhubarb pie for dinner. I can’t describe to you how delicious and life-changing that pie was to me. It is still, nine years later, my absolute favorite dessert. In fact, when we traveled to the UK and Iceland, there was rhubarb everywhere. I think I had some type of rhubarb pastry or beverage just about every single day. I brought back some rhubarb gin from a distillery in Edinburgh and keep it in my cabinet for special occasions. We even ate at a restaurant called Rhubarb in Edinburgh. I’m basically obsessed with rhubarb.

So, the point is, if you have never tried rhubarb, I would highly suggest trying it combined with something sweet the first time, ideally mixed with strawberry and sugar in a giant pie made by my mother-in-law. Then maybe try out this more savory version on pasta, if you dare. Also, don’t eat the leaves. They are toxic. But most stores remove them ahead of time and if you’re buying it frozen, you have nothing to worry about.

View all posts by hello.kalin

This site uses Akismet to reduce spam. Learn how your comment data is processed.

I made this last weekend, and even after a couple days of leftovers, I already want to make it again! This has been one of my favorite recipes for almost a decade now, and I can’t believe I’ve never shared it. I never gave it a name, so let’s just go with Nutty Noodle Salad for now 🤷🏻‍♀️ It’s crunchy, sweet, spicy, fresh, slurpy... all the good things. 💚
Me thinking I’ve only been absent from here for a month or two, then realizing it’s actually been 7 months. 😬 What is time these days? There’s a lot I wanted to say, but I’ll just say this: My advice to you is to make a giant vat of macaroni salad, safely share some with a friend, and keep chugging along as best you can. Sending you all lots of love. 💚
All I wanna do is curl up with a big plate of potatoes and a good book while the snow falls outside. That’s mostly what I’ve been up to lately, and it’s been pretty great. My formula for happiness isn’t that complicated these days. (🙂=🥔+📗 or 🙂=☕️+📖)
Made a batch of lentil + mushroom “meat”balls yesterday. 🍄 Haven’t made these in forever, which is dumb because they are so good and super easy to make. 🤗 Ingredients below — full recipe on my blog (just search “lentil mushroom” to find them).💚
Today is my birthday. Wish me a happy birthday! 😂
Are you trying to eat more plants this year? 🥬 If so, please remember you don’t have to be perfect. Any small change is huge, and being able to follow a plant-based diet is an enormous privilege in so many ways. Having the means, the time and a body that allows me to eat this way are all things I’m very grateful for. All of us doing a bit more imperfectly will go a longer way than pressuring ourselves to being 100% perfect, which isn’t usually sustainable (plus pressuring others to be perfect can overwhelm + scare people away in the process amirite).✌️
Creamy paprika pasta with roasted broccoli 🤗 Wishing you all an amazing Sunday and almost new year!💚
All I really want this holiday season is for someone to come deep clean my bathtub. I already had some avocado toast with mushrooms sautéed in coconut aminos & topped with everything bagel seasoning, so my first wish has come true! 🥑🍄🍞 If you celebrate Christmas, I hope you have an amazing time and can build some great memories. If you’re alone during the holidays, I’m sending extra love your way. If you’re feeling down or depressed this time of year, or going through a difficult time in your life, I’m sending you even more love with a reminder to take it one day at a time, be kind to yourself, and remember that you are loved and matter so so much. 💚🎄
Most days you can find me with some version of a bowl filled with roasted veggies + fresh greens + a grain. I get genuinely excited about them. So simple and so dang delicious, plus it makes my arthritic arse feel pretty good. Since my kitchen is basically an ice box (we should probably move 🤔), tossing veggies in the oven or air fryer is perfect because it warms up the kitchen and I don’t have to be in the room while it cooks. 🥶💚 .
Follow hello kalin on WordPress.com
Loading Comments...
Comment
×
<span>%d</span> bloggers like this: